A Remarkable Day in an Israeli Hospital

Have you ever had one of those days when you are just really happy that you went to work? Today was one of those days! I recently started working at Schneider Children's Hospital in Israel as an attending Pediatric ENT.

This morning, one of the other doctors asked me if I could see a baby who had become hoarse. She told me she was very busy and would really appreciate the help. As the new kid on the block and with special training in managing pediatric airways, I obviously said yes, even though my clinic was bursting at the seams and the wait time for my patients was already approximately 2 hours.

When I finally called in this sweet little eight month old boy, I learned that he had undergone open-heart surgery for a congenital heart defect two months earlier. Since his surgery he had developed severe hoarseness and was coughing during feeds. His twin brother who had also undergone heart surgery was waiting outside with his grandmother.

I apologized for the long wait to his mother and grandfather, who came in from Jerusalem to help his daughter with her twin boys. Once I examined his larynx with the fiber-optic endoscope, the suspected diagnosis of vocal cord paralysis was confirmed. This is unfortunately a recognized complication of open-heart surgery in young children. 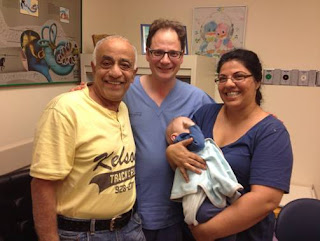 After I explained the diagnosis, prognosis and the future plan to his mother, as well as setting up an appointment to have his swallow function evaluated, his grandfather who had been quite fidgety during the whole encounter, turned to me and asked if I was American or British. I smiled and told me neither. I'm Canadian. His daughter was embarrassed and informed him that Canadians hate being mistaken for Americans. He then looked me in the eyes and told me that a Canadian doctor had one saved his life. He thought for minute and said that his name was similar to mine and sounded something like Dr. Jay.

I asked for more details and he proceeded to tell me that he attended the doctor's wedding. I lowered my voice and asked him what his name was, although by then I already knew. His eyes widened as he said "Rahamim Mizrahi". I felt lightheaded and got up from my chair. He started to cry and ran over to me. He gave me a big hug and kiss. He grabbed the back of my head and asked what happened to my ponytail.

I think some background information would be in order here: Around 10 years ago I used to work as a doctor on a mobile intensive care ambulance in Jerusalem. One cold winter night at around 3:00 AM we got called out to a home in the neighborhood of Gilo. A 59-year-old man who had suffered in the past from two heart attacks as well as coronary bypass surgery, rolled out of his bed and was "dead" on the floor.

A regular ambulance arrived on scene approximately 15 minutes before us and started CPR. From my experience, the effectiveness of basic rescuer CPR was very limited in its ability to maintain adequate levels of oxygen to the brain. A quarter of an hour would almost certainly result in irreversible brain damage. Once on the scene, we immediately started a full resuscitation including mechanical ventilation, intravenous medications and repeatedly shocking his heart with a defibrillator in what appeared to be vain attempt to jump start it again.

After about 20 minutes my paramedic turned to me and said "Dr. Jay, just call it." Meaning I should recognized the futility of our actions and pronounce him dead. At that time it seemed like the right thing to do. However, this was a 59-year-old man lying on the floor in his bedroom. His wife and 18-year-old son were watching us throughout the whole ordeal and praying for their father to stay with them just a little longer.

According to my monitor, he still had what appeared to be electrical activity in his heart. This is despite the fact that he hadn't had a pulse now for nearly forty minutes. I instructed my team to keep on with the resuscitation efforts until we either get his heartbeat back or all signs of activity in his heart cease. Finally, after we had been working on him for 45 minutes, administered countless drugs and delivered a total of 16 powerful electrical shocks to his chest we got a heart beat. It was weak, it was thready but it was real. We loaded him on the gurney to the ambulance unconscious, mechanically ventilated, and likely never to recover any sort of meaningful life.

Sirens wailing through the deserted streets of Jerusalem, we rushed him to the Sharei Tzedek emergency department. I did not feel good about this resuscitation. I did not feel like we were heroes or lifesavers. I figured, at best, he would die within the next few hours and at worst he would live for a few years as a vegetable breathing through a hole in his neck and eating through a tube in his stomach. I had seen it countless times and I wouldn't wish it on anybody. I distinctly remember the doctor in the ER looking at me and asking cynically why I even bothered resuscitating him.

Although, on an academic level, I was interested to know what had happened to him, the whole incident left me feeling pretty lousy and I didn't follow up on his condition. I guess that is one of the cold mechanisms that we employ to shield ourselves from the abject suffering to which we are exposed; close the chapter and move right on.

Around two months later I got a strange call from a woman who claimed to be his daughter. She had some difficulty finding me but wanted to update me on his progress. After lying in the ICU for two days, he awoke from his coma. He was somewhat confused and suffered significant memory lapses. For example, he thought his twenty-year-old daughter was still in sixth-grade and was wondering why she hadn't finished her homework. This confused state lasted for two more weeks. Then, one morning, he woke up and his memory was back. He was completely oriented and aware of everything that happened. A full recovery by any standard!

From that time on, his daughter had made great efforts to locate me because they wanted to have a Thanksgiving party and they didn't want to have it without me present. I was both shocked and thrilled. It was a great party, delicious food, and a far more festive atmosphere then the previous time I had been at his house. This reunion was followed a few months later by Rahamim's attendance at my wedding where we all danced with unmitigated joy.

That was nine and a half years ago.  Since then I have often thought about Rahmi, as he likes to be called. Every time a patient in serious condition, or a family member, has asked me if there is hope he comes to mind. I always tell them that miracles can happen and I've even seen a few in my life. That being said, within a short time we fell out of touch. As before, I never made any significant efforts to find out what happened to this remarkable man because I was afraid that I would not find him alive. His prognosis, after what his heart had been through so many times, was poor.

Once again, after our serendipitous, emotional reunion today I am amazed at what the human spirit and body can overcome. He remembered in perfect detail my father, and that he is a psychiatrist who was interested in talking with him about his experience being clinically dead for an hour. He remembered how my father took him around the wedding to bless the various guests. He remembered my wife and gently reprimanded me for flirting with a nurse today in the clinic.

He called his wife in from the waiting room with her other miracle grandson, who had also undergone heart surgery. She didn't recognize me at first. I told her not to worry because the first time I had been in her house things were crazy as we were busy with a resuscitation. She almost fell over in disbelief. It was amazing to see her again. I told them that their grandson would now be my patient for many years to come and that I will personally make sure that he has a crisp clear voice. I fully intend to dance at his wedding the same way his grandfather danced at my wedding.

As I said before, once in a while it's really worthwhile to go to work. You never know who you just might bump into.